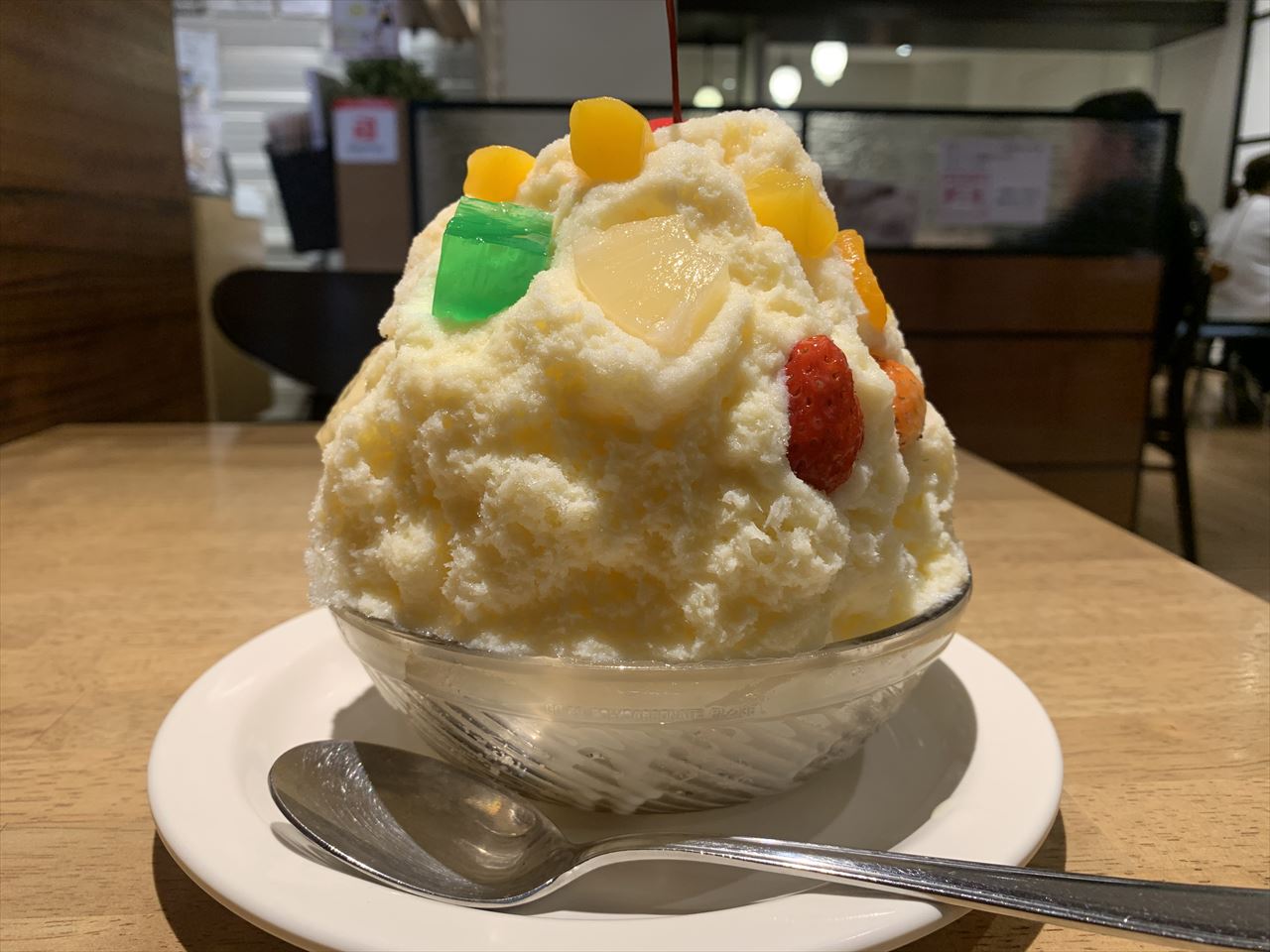 Kagoshima is famous for its Kurobuta pork, Satsuma-age (fried fish cake), and Shirokuma (shaved ice).
The Tenmonkan Mujaki Honten in Kagoshima City is famous for its Shirokuma.
I would like to eat Kurobuta pork as shabu-shabu or tonkatsu.
The original Kurobuta shabu-shabu restaurant, Kurobuta Ryori Ajimori, is also located in Kagoshima City and is only a few minutes walk from the main Tenmonkan Mujaki restaurant. We appreciate the easy access to both restaurants.
The famous Kagoshima ramen restaurants, "Pork Toro" and "Komurasaki" are also located in the Tenmonkan area. You can eat ramen easily even by yourself.
If your base is Kagoshima Chuo Station and you don't have much time, you can also find Shirokuma's Tenmonkan Mujaki, Komurasaki and Zabon Ramen in the Amu Plaza Kagoshima station building, where you can enjoy Kagoshima's specialties.

Shirokuma is shaved ice with condensed milk and fruit on top.
It is said to have originated in Kagoshima City, and the main Tenmonkan Mujaki store is one of the most famous.
The regular size is 16 cm high and 14.5 cm wide, which is quite large. For this reason, there is also a size called baby.
The staff will tell you that if you look at the polar bear from above, you will see the face of a bear. 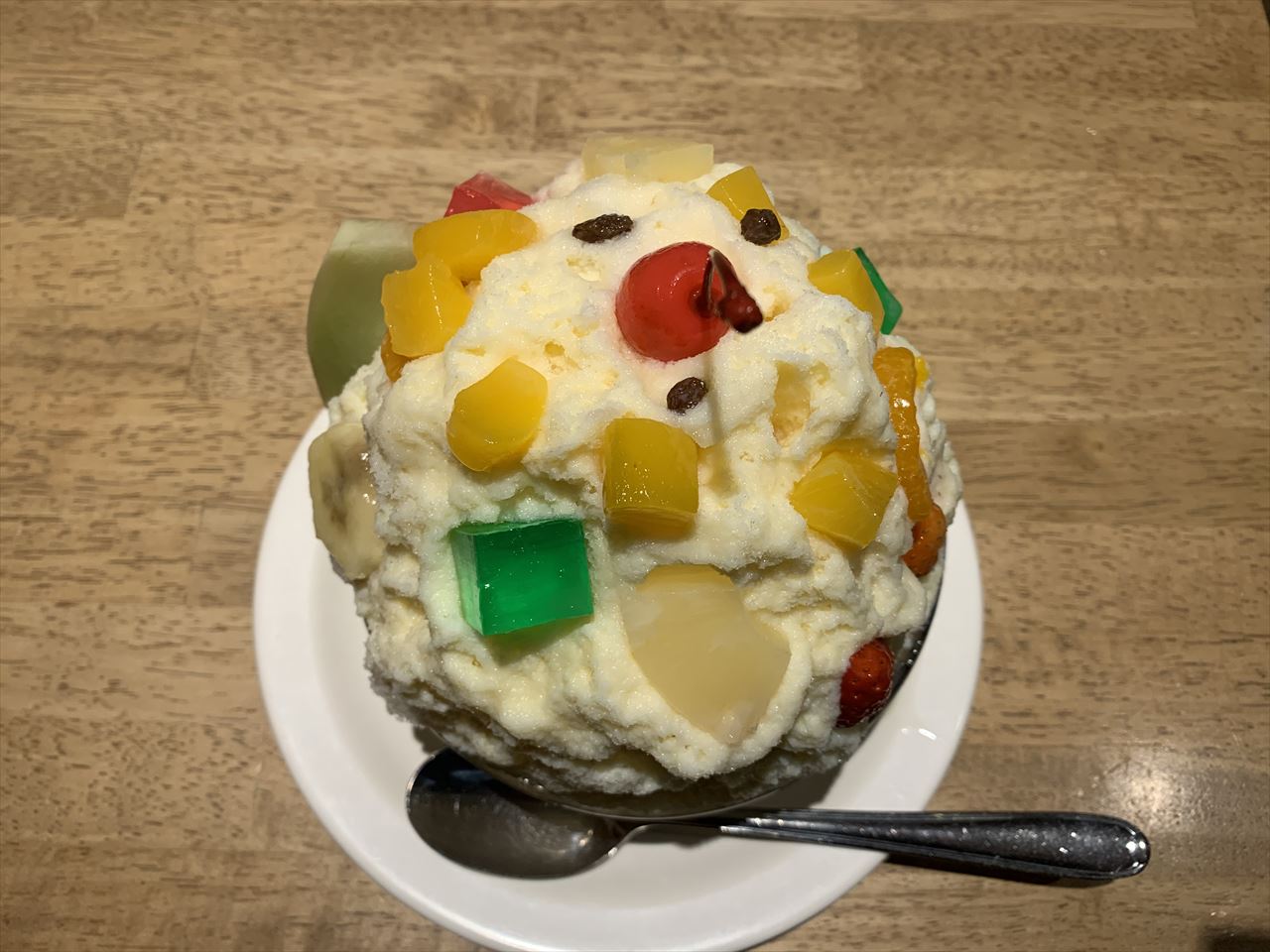 Tenmonkan Mujaki Honten
Address 5-8 Sennichicho, Kagoshima City, Kagoshima Prefecture, 892-0843, Japan
Hours: 11:00 a.m. to 6:30 p.m. (basically all year round)
Location: Tenmonkan is the downtown area of Kagoshima City. You can find many food shops here. If you arrive at Kagoshima Chuo Station by Shinkansen or other means, take the streetcar to Tenmonkan-dori and walk to the restaurant. It takes about 20 to 30 minutes on foot from Kagoshima Chuo Station, but if the weather is good, you can walk along the route to the bronze statue of Toshimichi Okubo, Ishin Rekishi Road, Ishin Furusato Kan, and the birthplace of Takamori Saigo. There doesn't seem to be a parking lot. The Tenmonkan area itself is a shopping district, so you can walk around the stores in this area.
Comment: At 740 yen for the regular size and 550 yen for the baby size, I tend to order the regular size, but it is too big for one person. But it's still delicious, so I can eat it. This is a place where you can eat more than just the Shirokuma.

Tenmonkan Mujaki Amu Plaza
Address Amu Plaza Kagoshima B1F, 1-1 Chuo-cho, Kagoshima City, Kagoshima Prefecture, 890-0053
Hours 11:00 a.m. to 7:30 p.m. (basically all year round)
Location The store is located in the Amu Plaza, a station building at Kagoshima Chuo Station. This makes it an easy place to go when you are on your way to the station or when you arrive at the station. 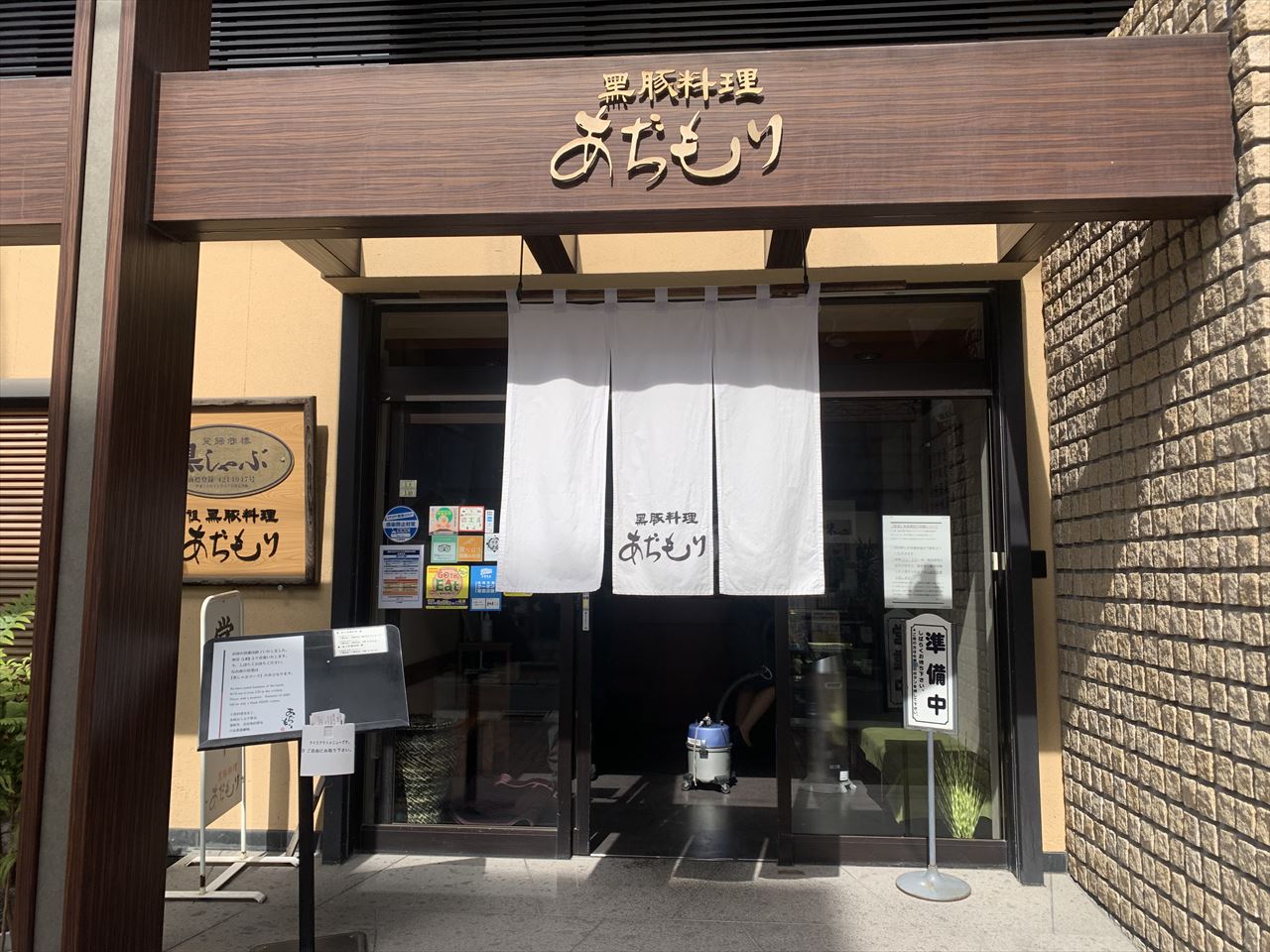 Kurobuta Ryori Ajimori
Address 13-21 Sennichicho, Kagoshima City, Kagoshima Prefecture, 892-0843
Hours 11:30 a.m. to 2:30 p.m. / 5:30 p.m. to 9:30 p.m.
Location Take the streetcar from Kagoshima Chuo Station, get off at Tenmonkan-dori, pass by Tenmonkan Mujaki (famous for its white bears), cross the traffic light and you will find us on the left.

Ramen is easy to eat even for one person, and there is Kagoshima Ramen.
Komurasaki, Garufu, and Zabon Ramen, which are called long-established shops, seem to be famous.
Many stores serve pickles like white bean paste before the ramen is served. At Komurasaki and Sabon Ramen, pickles were served before the ramen. 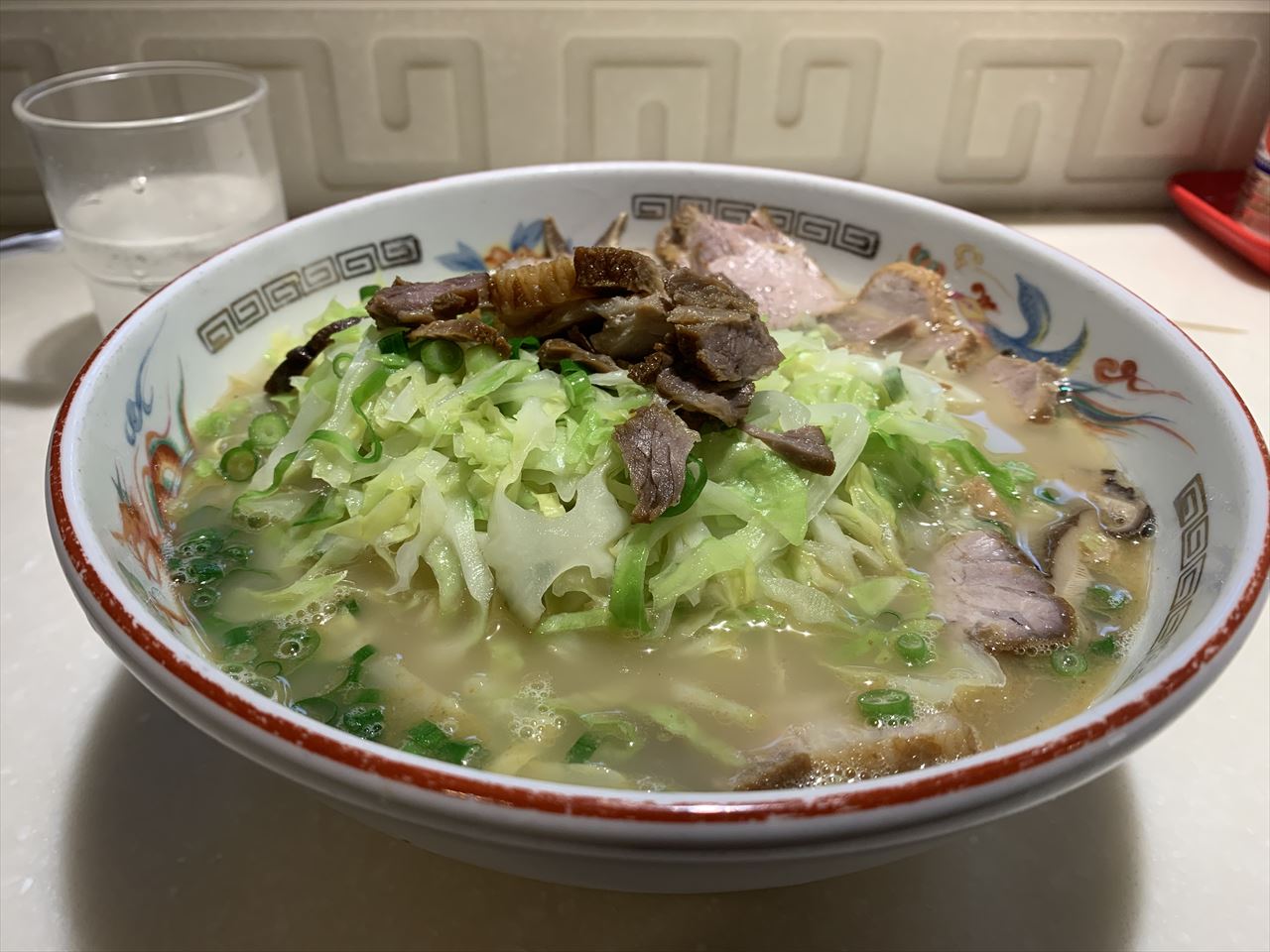 Komurasaki Tenmonkan
Address: 11-19 Higashi Sengoku-cho, Kagoshima City, Kagoshima Prefecture, 892-0842 (Phone number: 099-222-5707)
Hours: 11:00 a.m. to 7:00 p.m. (last order before 7:00 p.m., so check with the store if you are last minute)
Location From Kagoshima Chuo Station, take the streetcar and get off at Tenmonkan-dori.
Take the streetcar from Kagoshima Chuo Station and get off at Tenmonkan-dori. Walk through the arcade on the opposite side of Tenmonkan-Mujaki, which is famous for its white bears, and take a side street.
Comment: First, order and pay at the cash register. When you are seated, white pickles are served, and you wait for your ramen while eating them.

TonToro Tenmonkan Arcade
Address 11-17 Higashi Sengoku-cho, Kagoshima City, Kagoshima Prefecture, 892-0842
Hours: 10:30 a.m. to 8:00 p.m.
Location The location is almost the same as the Komurasaki Tenmonkan branch.
From Kagoshima Chuo Station, take the streetcar and get off at the Tenmonkan-dori stop.
Take the streetcar and get off at Tenmonkan-dori. Walk along the arcade on the opposite side of Tenmonkan-mujyaki, famous for its white bears, and take a side street. The store is located in front of Komurasaki on this route. 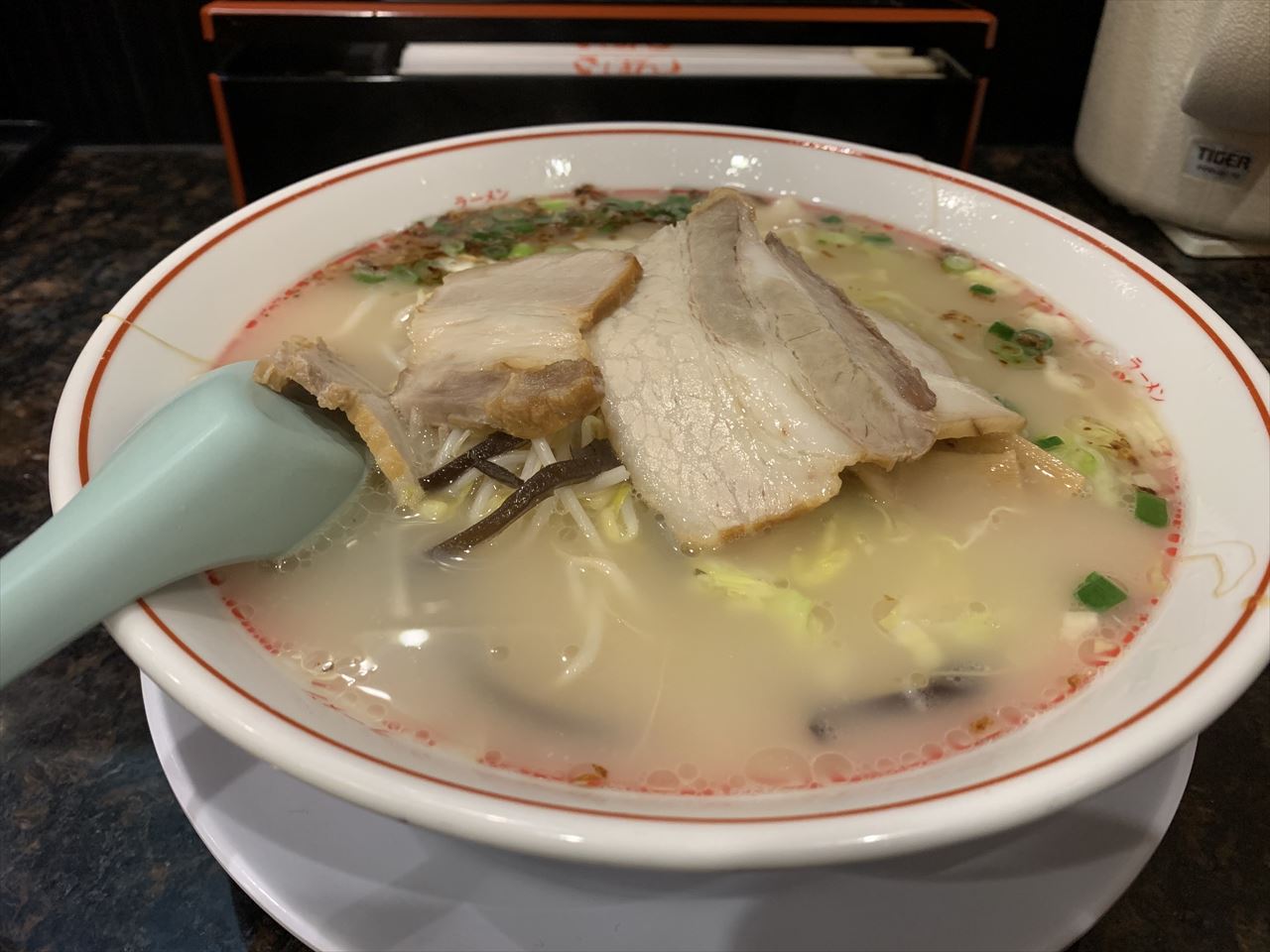