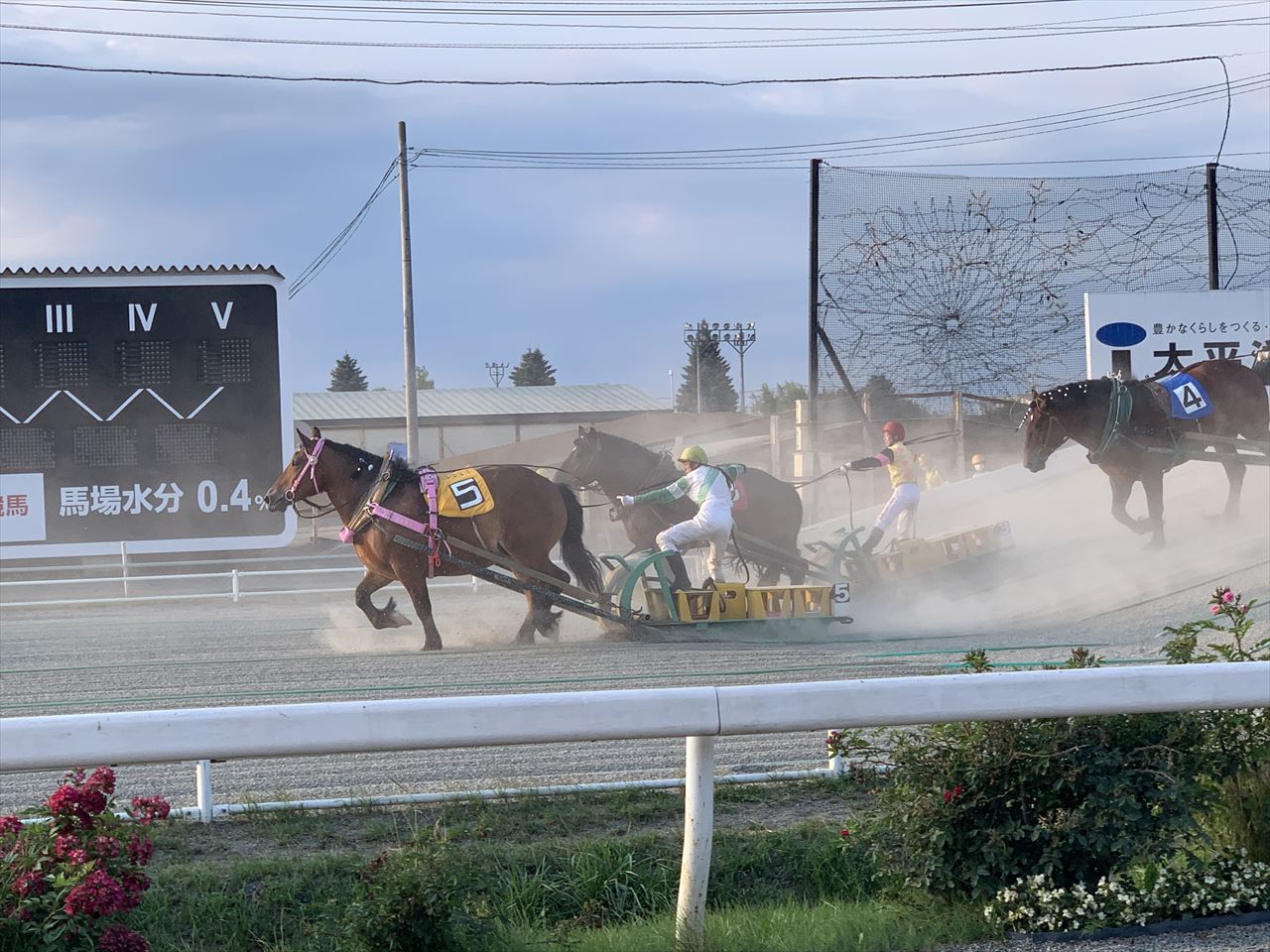 Ban’ei horse racing is one of the famous attractions in Obihiro. Ban'ei Horse Racing is the only race of its kind in the world. Large draft horses, weighing about 1 ton, race on a separate course in a 200 m straight line while pulling an iron sled that weighs up to 1 ton. Even if you don't buy a betting ticket, it is exciting to see the powerful horse racing up close. We recommend you to visit there if you are going to the Obihiro area. Ban'ei horse racing is held mostly on Saturdays, Sundays, and Mondays.

Banei Horse Racing official Website
Banei Tokachi (banei-keiba.or.jp)
There is a parking lot for 750 cars next to the racecourse, and it is usually 100 yen. 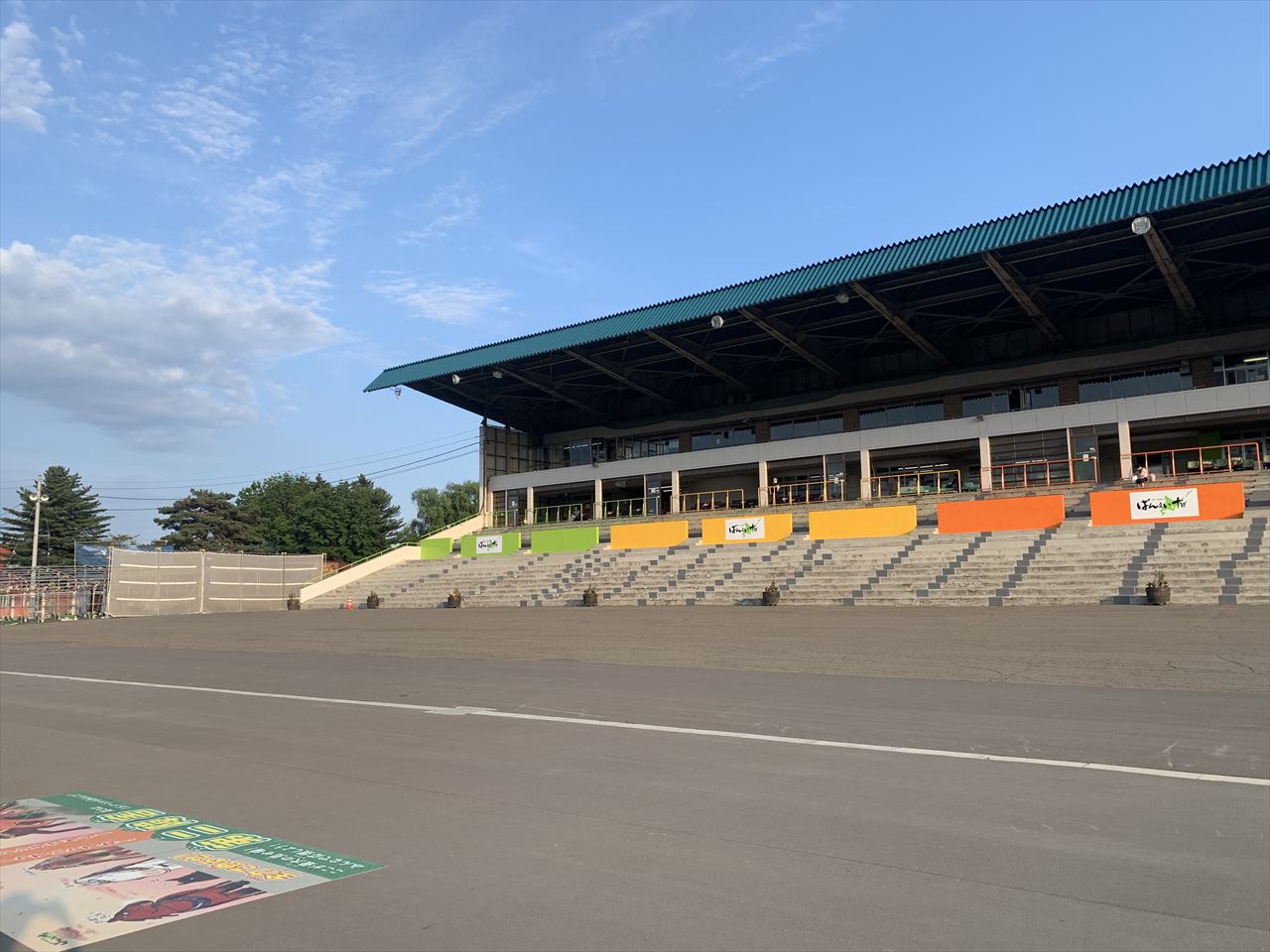 It is so nice to spend a relaxing time soaking in a moor hot spring known as a "beautifying hot spring", the plant-derived moor hot spring abounds in natural moisturizing ingredients that leave your skin smooth after bathing. Moor hot spring is a very rare hot spring even in Japan. You can only use the bath in some hotels if you pay the fee, even if you do not stay at the hotel. 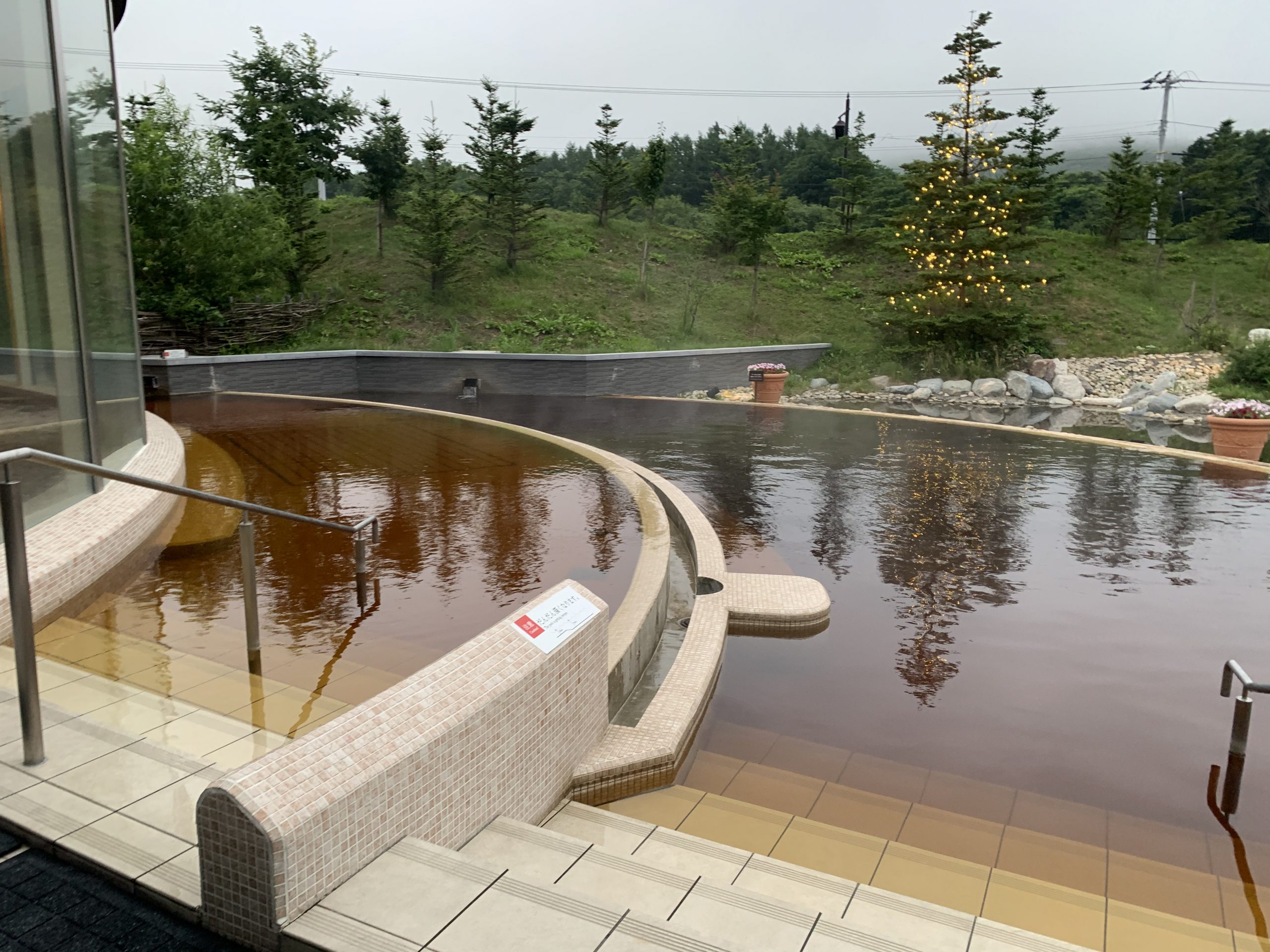 Naitai Terrace is a place where you can relax and eat while overlooking Japan's largest highland farm in Kamishihoro-cho. You can feel the vast land and nature of Hokkaido. It's a little over 50 kilometers from the city of Obihiro, about an hour's drive away. This place is open from May through the end of October and closed for the rest of the year.
Please check the details on the official website in advance.
Address: 128-5 Kamiotofuke, Kamishihoro-cho, Kato-gun, Hokkaido, Japan
Website: https://karch.jp/naitai.php 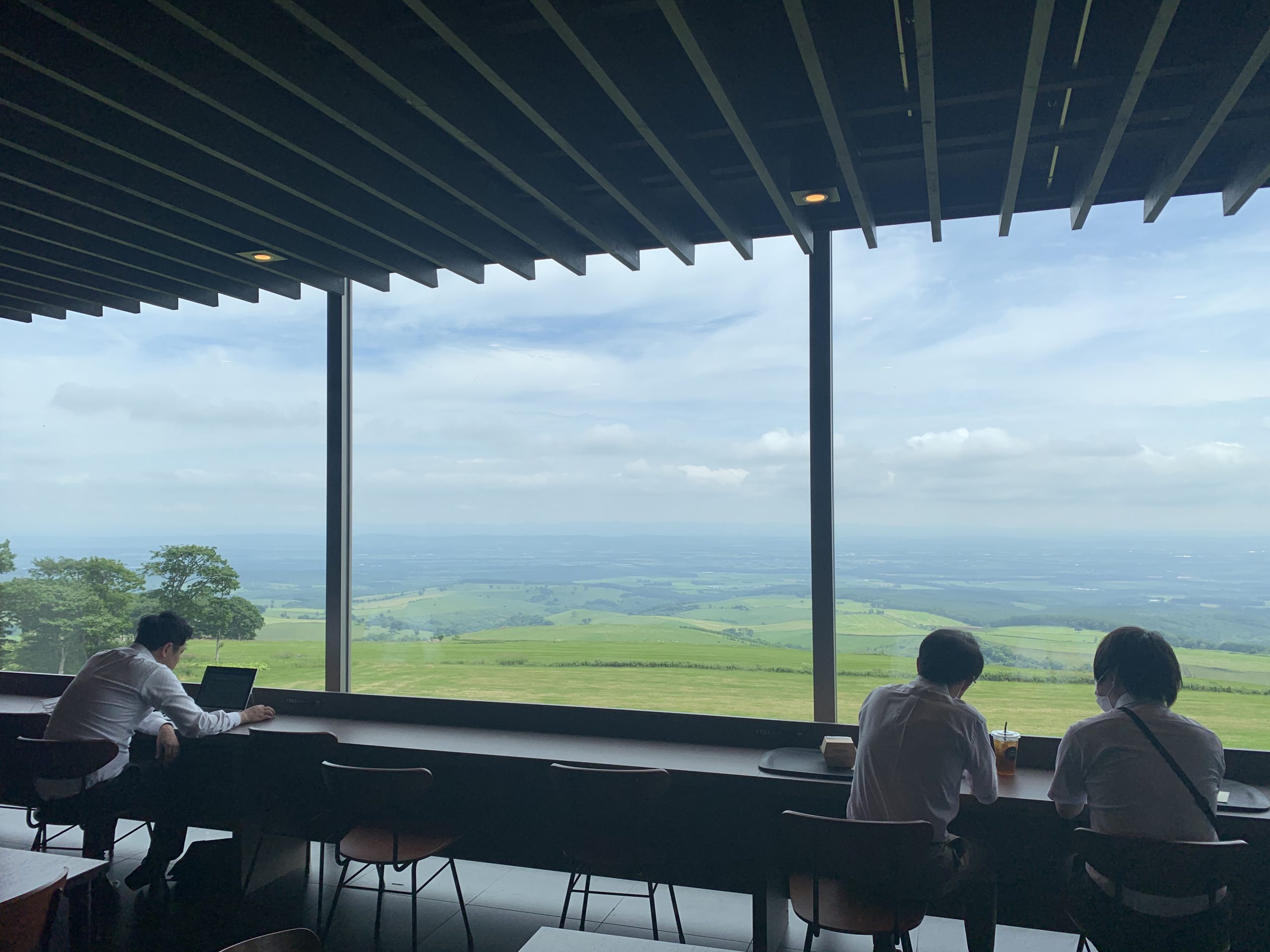 The Taushubetsu Bridge is one of the highlights of Kamishihoro-cho. This bridge was built for the railway in 1937, but after the line was discontinued in 1987, the Nukahira dam was built, and the bridge sank to the bottom of the Nukahira lake. However, every year the bridge appears in the season when the water level of the lake is low, so it is called the "phantom bridge" and became a popular tourist attraction.
The season you can see the Taushubetsu River Bridge is between February through June, but it seems to change depending on the amount of snow and rainfall in that year. You can see the bridge from the observation deck by yourself. If you want to go near the bridge, you have to join a guided tour of a local NPO.
Higashitaisetsu Nature Guide Centre(NPO)  Directions:
The observation deck has no address, and there is no phone reception in the mountain area. First, you should set the destination as Higashitaisetsu Shizen Kan (Higashi Taisetsu Nature Center) and ask the museum staff how to get to the observation deck. If the nature center is closed, go straight on Route 273, and you will see a sign that says "500 meters to the Taushubetsu Bridge." But there is no official parking lot, but there is a space where about five cars can park on the road and park your car there. Then it takes about 5 minutes to walk to the observation deck.
Higashitaisetsu Nature center
The view from the observation deck. (Photo) 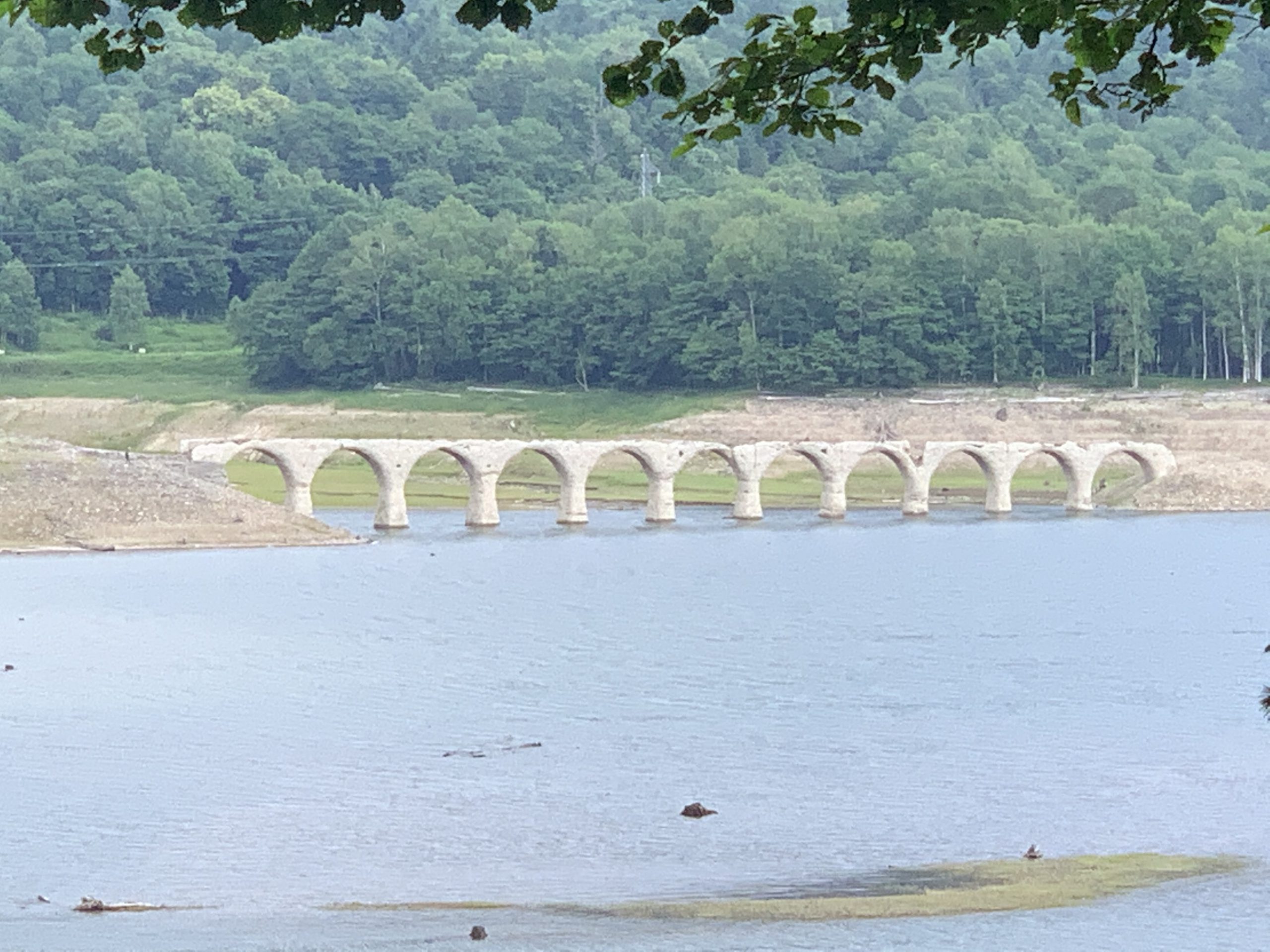 END_OF_DOCUMENT_TOKEN_TO_BE_REPLACED

Tottori Dome is a gymnasium with a dome-shaped roof in Kushiro City, and the main arena has artificial grass on the floor. It is a gymnasium mainly open to local citizens for indoo …

END_OF_DOCUMENT_TOKEN_TO_BE_REPLACED

Obihiro no Mori Ice Arena is in Obihiro City. The arena is located at Obihiro-no-Mori Sports Park, which includes a baseball stadium, an athletic stadium, and a public swimming poo …

END_OF_DOCUMENT_TOKEN_TO_BE_REPLACED

The Norokko Train is a train that takes you from Kushiro Station to Touro Station with a view of the Kushiro Marsh. Unlike the observatory, the train runs close to the marshland, s …

END_OF_DOCUMENT_TOKEN_TO_BE_REPLACED

From Shiretoko Pass, head towards Rausu-cho, and just before the Rausu Visitor Center you will find the Kumano-yu bathhouse. There is no address, so you have to drive carefully to …

END_OF_DOCUMENT_TOKEN_TO_BE_REPLACED

The Tawadaira Observatory is a large ranch that offers a 360 degree view of the horizon and can be reached by car from Kushiro City in less than an hour and a half. It is a very va …

END_OF_DOCUMENT_TOKEN_TO_BE_REPLACED

The nearby Lake Mashu is called the Lake of God in the Ainu language. The pond is called "Kaminoko-ike (Kami = God)" because it is made of groundwater from Lake Mashu. This pond is …